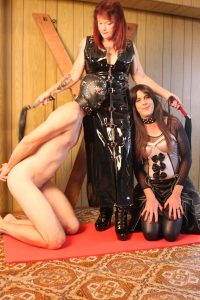 So I did a lot of research online and I joined sites like fetlife.com, alt.com and collar.me and figured I was dominant/bossy by My very nature. And I became enamored with the kink scene. I took to the lifestyle with gusto, attending every party, munch and event I could to learn how to be a good Domme. I sought out good mentors to teach Me and took every opportunity afforded Me to play and get real hands-on experience.  Apologies to the devoted slaves who suffered mishits in My earliest attempts.

It wasn’t until a few years later I discovered I was also a sadist. Saying I discovered it was not really correct. It was actually nurtured / borne out by a submissive mentor and long-term fetish friend.

Being labelled a Domme doesn’t necessarily cover the full nature of dominance in My experience. I’ve come across so many types of domination – to categorise yourself under a singular banner like “Domme” is IMHO a misnomer. I’ve encountered many different styles over the years. From women who just want to be the “boss in the bedroom” to sadists whose singular satisfaction comes from torturing their submissive/slaves.

There are women who want to humiliate and objectify their slaves.  Others who want their slaves to prove devotion through trials of pain and suffering. Then there are the ones who just want to be worshipped and adored (including body worship), being waited on hand and foot by a devoted servant.

Being a sadist by nature, I’m the kind of Domme who likes My servants to undergo trials to prove their devotion to Me. This has been done in many ways – financial tributes, gifts, acts of service, enduring pain and suffering, deprivation (of senses and liberty) at My hand. Masos are My genuine favourites.

Although I am inclined to show great amusement at My slaves’ discomfort, I’m not someone who is into humiliation or degradation as I feel it has negative connotations and is not a good base for a deep connection with someone.

I’m not saying Dommes have to fit into one specific category but the majority of My nature fits into the “trials to prove devotion” category. I have had My share of body worship over time with play partners. Not in my professional career. I’m a little old-fashioned in that I don’t believe a Domme should have to be undressed in the presence of a client, let alone sharing body fluids. I have on occasion done golden showers but I prefer to put My urine in a bowl to make sure none of it is wasted.

It’s been a fascinating adventure being in the fetish community. I have a natural interest in the perverse (don’t we all?). I’ve always felt comfortable around naked people of all ages and genders, having been a registered nurse (My first career) for 13 years. Those years of nursing taught Me so much about reading people, especially under duress, how to watch body language, how to establish rapport and trust with the people I deal with.

Being open, honest and forthright (professional) has held Me in good stead over the years. It isn’t that I command respect as a Dominant (respect should be earned, not blindly given) but I do expect it. Having spent many years honing My skills and treating people well I feel I deserve respect – I’ve earned My stripes.

So what kind of Domme are you, or what do you aspire to be? I’ve had the benefit of some really great mentors over the years, some not even dominant. But how to find them? – especially now there are less chances to socialise than there were “back in the good old days”.

We’re lucky to have resources like fetlife.com to do some really good research, join groups, have discussions, socialise and have genuine questions answered by like-minded souls all over the world.

This isn’t a plug for fetlife as such – if I could have found another site that was more informative, I’d be plugging that. I’m just grateful I did most of My apprenticeship through “real life” situations. But I didn’t get there by not doing My online research first.

Dommes have a huge responsibility – to be knowledgeable and skilled. Don’t expect to be worshipped/respected/trusted if you can’t get your act together. You owe it to your slaves/submissives to earn their willingness to serve you.