Another delightful visit from slave d this week, who gifted Me with sharing one of his wicked short stories.  Picturing Annastacia Palaszczuk giving Bronwyn Bishop and her twin sister a double spanking on live TV was highly entertaining.  Here it is….

Premier Brenda was livid with anger, and her staffers and advisers had retreated to the 13th Floor of the State Offices Building, where her triskaidekaphobia kept her at a safe distance.

Since the last election, which had brought her to power with a shaky majority, Brenda had been shocked by the scandals that the media had uncovered regarding Members of her own party, ranging from drink- driving to bribery and corruption.

So it was no surprise when the latest outrage to emerge, involving her most trusted political allies – Saffron and Scarlet, the Member for Rockvegas  –  had caused her to go ballistic. 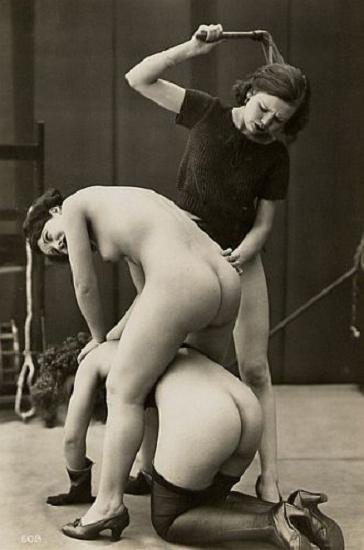 peacefully as the sisters breakfasted on the balcony of the luxurious

riverside villa they stayed in when they were in Brisbane.

“It looks as though Kevin’s drink-driving charge will cost him his seat in Parliament,” chuckled Saffron, as she spread caviar paste on her French toast … “

“… and Hilary will probably do some serious jail time over her tax evasion scam,“ laughed Scarlet, who was perusing the news on her I-Phone.

The wicked twins’ enjoyment of their friends’ misfortunes was interrupted by the blaring of the special phone that Premier Brenda insisted that every one of her Members carry with them at all times in case she wanted to summon them.

“It’s like this, girls,” the furious Premier snarled through gritted teeth as she made her favorite Member of Parliament stand like two naughty children in front of her desk.

“My contacts in the media have informed me that yet another scandal is headed my way, and that, this time, it involves your not-so-good selves.

“I understand that that palace you live in is rent-free because you helped the owner get a fat government contract. And that the five-million dollar grant to build a Cultural Centre in Rockvegas was wasted on a clubhouse for your Spanking Club. Did you think that no one knew that your study tour of Hungarian infrastructure was spent on visiting every spanking club in Budapest?”

Scarlet and Saffron’s pretty faces turned white with horror as they realized that they were in even more desperate strife than Kevin and Hilary.

Just as they were about to blame each other for the mess, Brenda went on.

The management of Channel Eight were not happy with the sudden

change to their News format that the Premier demanded; but Brenda soon persuaded them to see her point of view.

Popular newsreader Barbara explained to shocked viewers that the

Member for Rockvegas had admitted to some very serious offenses and that they were about to be disciplined on-air by the Premier herself. (Parents were advised to use discretion.)

Brenda had decided to cane the bottoms of the Spanking Twins using a position she had once seen in a collection of nineteenth-century photos of Parisian life.

One of the unhappy ladies (wearing nothing but television make-up) would be crouched on her hands and knees while her sister stood astride her on the floor of the studio, leaving all four buttocks exposed and vulnerable.

While the three ladies had been in their chairs in the make-up room, it had been decided that Saffron and Scarlet would each receive six strokes in turn from the fearsome cane Brenda had brought with her. Saffron had suggested that the twins could signal when they were ready for each stroke by rising up on their knees if they were in the lower position and on their toes if they were the upper victim.

Phyllis the make-up lady was given the privilege of deciding which sister would take which position. Not even Bruce, the Sports Reporter who was to compere the event, would know which twin was which in the double arrangement.

Meanwhile, the twins’ friends Cindy and Jane were watching their ordeal on the giant screen in the Rockvegas Spanking Club’s $ 5 000 000 clubhouse.

“Bruce should stick to calling the cricket! ” sniffed Cindy. “He knows nothing about spanking! “

” He should just say nothing,” added Jane.

” Oops! There goes the first stroke. Did you hear that yelp, Cindy?”

“I heard the swish too, Jane. There goes the second cut. And she made more of a howl than a yelp.

The two friends enjoyed another  three yelps and four howls, before the ordeal of the Spanking Twins was over. As the Premier made a short address to the people of Queensland promising  better conduct from their Members of Parliament in future, and weather girl Sandy sprayed cold water on the twins’ striped bottoms, Jane and Cindy turned off the television and opened a bottle of champagne.

The next morning, Saffron and Scarlet resumed their leisurely breakfast routine, somewhat disappointed that their spectacular spanking marks were already starting to fade.

Taking her lovely head out of the morning paper, Saffron noticed that Brenda’s approval rating had shot up 20% as a result of her decisive handling of the latest corruption scandal.

“Yes, Saffy,” Scarlet agreed, “but our personal rating went up even higher, according to Newspol. Brenda has agreed that we’re too popular to be kicked out of her party.”

“Does that mean that if she found out about our plan to replace the free milk to school children with flavored water, she would …”

“… probably give us a seat in Cabinet,” finished Scarlet, as the twins’

evil laughter echoed over the riverside. 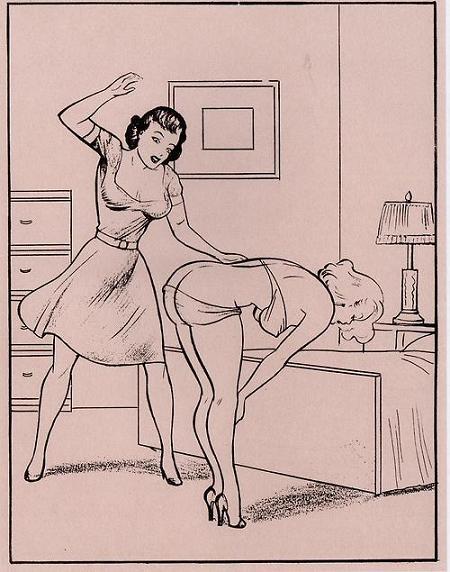 Another delightful client over the weekend, who was lucky enough to actually catch Me at home to see Me for a lengthy session of slave training and CBT.  He’d been carrying My advertisement around for nearly a year – I was pleased that he plucked up the courage – finally – to contact Me.  And he was suitably rewarded for his efforts.

In the middle of his electrical play, he asks whether I have any needles.  “Do I have needles!” I exclaim.  “Only a drawer FULL of them! What size and where would you like them?”  And here was the result, what I like to call “needles and pins”…..

I can sense slave t’s apprehension at the prospect of Me moving to the Gold Coast.  The date is fast approaching when he will be back in his chastity device (the one of My choosing) having been trimmed, feminised and frocked for his recent taunts.  I wonder which one I will choose, the Holy Trainer or Kali’s Teeth?

slave t continues to taunt his Mistress, with updates on his recent purchases of nasty chastity devices.  He’s just bought a set of Kali’s teeth at My suggestion, yet has made no attempt to see Me again before I relocate to the Gold Coast in a few weeks.

Watch out then, slave t.  You’ll have NO excuses then.

Cage Mistress likes, punishing spikes, Her pleasure cannot be disguised.
A huge defeat, controls complete, worm must remain still and downsized.
Got to visit, slave must submit, just hopeful term might get revised.
Error for sure, fetters secure, Domme’s leading me out feminised.

You just can’t beat old school manners.  A delightful new client presented My tribute in this beautiful card today.  He even left it blank so I could re-use it.  How thoughtful!

I left him suitably rewarded, with some rather nasty cane strokes – marks he’ll carry with pride for a week or two.  And I look forward to seeing him again, as we arranged to do before Christmas.  He told Me I was wonderful, beautiful and extremely good at what I do.  He also sent Me this email the following day.  How could I not look forward to seeing such a well mannered, appreciative client again?

I’ll look forward to a repeat experience…
Thanks for the Band Aids, which are still on my bottom.  A nice reminder of a great afternoon.
Your spanking technique is extraordinary!

It seems the tide is turning for chastity slave t, whose ribs are nearly healed.  Obviously he must be better, as the taunts resumed.  His attempts at cheekiness won’t go unnoticed though, once the Keyholder is in closer proximity……beware!

He’s even crafted My impending response for Me.  Here it is…

Move is complete, there’s no retreat, complete control having you locked.
Order restored, seems you ignored, my determined ways whilst you mocked.
Vanquished by Me, minus spare key, behaving as if you’re shell shocked.
Enforced stripping, now a whipping, and yes you are going home frocked.
And it seems he’s been doing his research whilst supposedly “free”.
http://i1.wp.com/www.ericstantonarchive.com/sissyfication/girls-school-for-boys-feminization.jpg

I hope you enjoyed your first session with Me today and I hope you will continue to explore your fetishes and take them to new levels.  Please do resume your fetlife profile.  Friend Me there and hopefully I can steer you in the right direction to meet like minded kinksters around your age range.  I’ll do My best.  Cheers MDR

That’s a great idea! Yeah, I enjoyed it! It’s given my ideas for what I want next time, and helped me learn about what I like, and what I would change! 🙂 I’ll be in touch

He’s since told Me he is really a naughty boy, so he better watch out on his next visit to see his Mommy Dearest!

Slave b was kind enough to send Me an update of his progress following our recent CBT needle play.  I am sure he will remember our session long after the bruises have faded.  hehe

So bruises all nearly gone 🙁

Just a little sore around base I think from the pump pushing against my pelvis.

You have my permission to use all pics on fetlife and your website etc.

Wear them with pride, slave b, knowing you served Your Mistress well.

DISCLAIMER: I do not perform this type of play with men of potential parenting age, unless you’ve had a vasectomy.

One of My favourite CBT diehards, slave b, was back for more punishment this week.  With the 2 inch needles he asked Me to get him a while ago – My pointy version of “six of the best”.  But not until after some pretty heavy duty sounding and the penis pump.  He sent Me a lovely thank you message following our session and an “after” photo – lovely shade of purple.

Thank u from your sensitive slave ro, for your careful & considered therapy on Wednesday – your increased intensity stretched the old fella beyond his comfort zone on only his second visit. Your ball stretching, truly outstanding☺. MDR – more than a wicked nom de plume!! Will txt u again before Xmas for further therapy.